Getting to Aldea Del Sol is so much easy because of the heavy infrastructural investment the island administration and the government at large has made here. To access this community, you simply take the Basak-Marigondon Road and when you get to Kadugoi, you simply turn left. As you arrive at the Pajac intersection, turn to the left as you head towards Bangkal and then finally turn right at Soong Road to get to Aldea Del Sol.

Lapu-Lapu City in Mactan Island is a first-class city and one of the most urbanized in the region. Even though it is located in Cebu Province, it enjoys administrative independence. According to a census done in 2015, the population of Lapu-Lapu was estimated at 408,112.

The Mactan Cebu International Airport (MCIA) is situated right here and serves as the main gateway to Central Visayas. It is a key connection point to international destinations such as Hong Kong, Taiwan, Japan, South Korea, and Singapore. By statistics, this airport is the second busiest in country after the Manila-based Ninoy Aquino International Airport. The MCIA is just 7 kilometers from Aldea Del Sol.

Apart from the airport, there are other top of the range landmarks near this community development which include:

Gaisano Grand Mall – This is a chain of shopping malls with branches all over Philippines. Its plan is to have 50 malls under its brand by the year 2020. From the property development, the mall is just 10.5 kilometers. Three of its floors are dedicated to clothing while others are for electronics. There is also a Convention Center and lots of places to sample local cuisine and even western food.

Mactan Doctors Hospital – This is a 151-bed private hospital that gives residents here and beyond total health care. It is equipped with cutting edge technology for complete diagnostic and therapeutic treatment. It is 4.5 kilometers from Aldea Del Sol.

Mactan Shrine – This is a historical shrine dedicated in honor of Ferdinand Magellan, Lapu-Lapu, and the Battle of Mactan which took place in 1521. The location of this shrine is the supposed place of battle. Lapu-Lapu was a native chieftain who resisted the invasion and conversion to Christianity of Ferdinand Magellan, a Spaniard. The shrine is just 4 kilometers away from the community residential development.

Marcelo Fernan Bridge – This bridge spans across the Mactan Channel and connects Lapu-Lapu City with Mandaue City. It is a cable-stayed bridge, 1237 meters long. It has pedestrian sidewalks and 4 lanes of vehicle traffic. It was officially opened in August 1999 and its name changed from Consolacion Bridge to the current Marcelo Fernan Bridge. From the bridge to Aldea Del Sol is 8.3 kilometers.

In addition to the above landmarks, the Bluewater Maribago and Shangri-La Resorts are just 2.9 kilometers and 4.7 kilometers away from this iconic development by Filinvest. 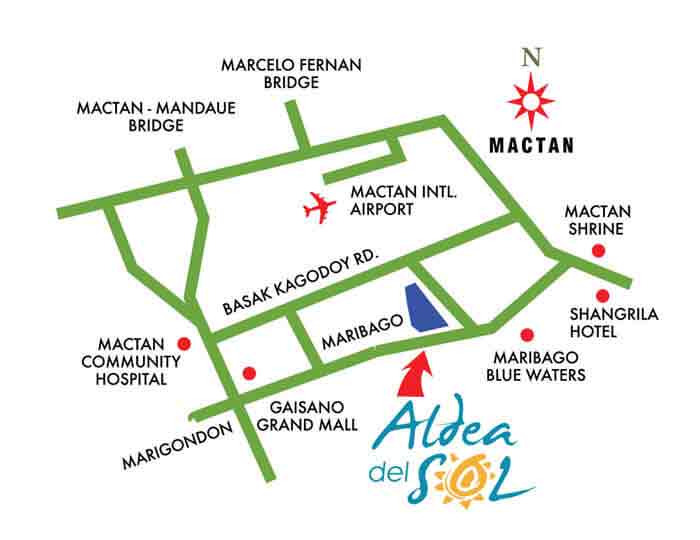